Hey, y’all!  I’m back!  I’m in Austin right now.  Got here yesterday, late afternoon, and I’ll be here for the next two nights.

Really sorry for the long absence…but, you can’t say that I didn’t warn yuh.  Between the temperamental Wi-Fi at the B&B and the guest-ranch where I stayed, and the activity-rich environment I was immersed in, there was just no reception and no time to post.

But, I’m gonna try to start makin’ it up to you, now.  Just know…I was in Hill Country heaven for the past four days.  I’m just not sure I’ll be able to adequately convey what it all felt like…but I’ll try.

So, I spent my first day in the Hill Country, generally in the east/northeast region…San Marcos…Devil’s Backbone…the historic Fischer Dance Hall (unfortunately closed until later in the day)…Blanco State Park…Pedernales Falls State Park…and ending the day at The Italian Place, a very cozy B&B in Stonewall, a very small town a little west of Johnson City on Highway-290, one of the main roads in the Hill Country.

Driving through any of the Hill Country, I’m not sure there’s any way to convey the feeling of what you’re seeing, in photos, or even in a video for that matter.

There are endless rolling hills and the valleys between them…endless…one after another in some areas…some hills are more gentle…some are long and steeper, and descend just as long and steep on the other side, after you crest the top, like a rollercoaster.  There are all kinds of hills…and all kinds of curves.  After all…they don’t call it the Hill Country for nothin’.  Sometimes, there’s a long, straight, flat stretch.  Most of the time…you’re really out in the middle of nowhere…ranch country.

It’s arid country.  The soil is either a hard, dry, pale tan clay…or rock.  The trees are generally shorter and stockier than I’m used to in New England, and are primarily oak, juniper and cedar…and there are a lot of pecan trees.  The landscape is sprawling.  There is so much open space that it’s nearly hard to comprehend.  As a New Englander, I am not used to being able to see out into the distance very often.  In Texas, in general, you’re able to see out into the distance pretty much everywhere.  And in the Hill Country, that distance is filled with hills and valleys.

Trees can be in groves, with a little space between each one.  Or sometimes they dot the landscape, with various bushes, tall grasses and cactus filling in some of the spaces.  And there are also dense forests.  Creeks, streams and rivers are everywhere.  Flooding and flash-flooding are constant issues and dangers.  They are a part of everyday life in the Hill Country.  There are constant road signs warning to watch out for water on the roads.  There are even water gauges along the roads that measure the potential flooding in that spot…in feet.

A lot of roads are lined with fences.  You frequently pass ranch gates along the road, with the ranch’s name or monogram on or near the gate, and a gravel road disappearing into the distance.

Speed limits vary widely from 25 or 35 mph in towns and around particularly sharp curves…up to 70 mph out in the countryside.  Speed limit signs approaching broad curves out in the countryside, caution you to slow down to 65 mph.  If you’re not doin’ 70/75 mph out on these roads, you’re holding up the lone pickup truck bearing down on you.

All of that said, the landscapes that you are driving through are beautiful and often expansive.  It’s a rugged beauty that is so foreign to me, being from lush, green New England.

My first stop was supposed to be a bar called Devil’s Backbone Tavern.  GPS directed me to “Riley’s Tavern on the Backbone” (in hindsight, I think I just turned in too soon).  I saw “Backbone” in the name and figured it was just a name-change since the twenty-year-old article I was basing my Hill Country tour on, so I stopped there.  Riley’s is a funky bar with lots of “stuff” all over the walls.

People look at you in Texas…they look you over, and are not bashful about doing it.  They will also immediately strike up a conversation with you as soon as you walk in the door.  This is just the way it is.  The handful of locals (I hope “locals” is okay.  “Residents” sounds too formal.) hanging out at Riley’s looked me over as soon as I walked in, but were also immediately friendly and funny, as soon as I self-deprecatingly introduced myself as a tourist.  I instantly liked this vibe, so I decided to stay for lunch.  As I was perusing the brief chalkboard menu on the wall, a woman sitting at a nearby table suggested I order one of Riley’s burgers, so I did, and started to settle in.

Then, I brought in my camera and asked the lone barmaid (is it barmaid or barista?) if she’d mind if I took some pictures…again, explaining this road-trip vacation.  She was very friendly and was perfectly fine with it.

As I made myself more comfortable, I noticed the local guys starting to cajole the barmaid about something, but I couldn’t understand what at first.  Then, the barmaid came out from behind the bar and proceeded to launch into a perfectly executed handstand, right on the concrete floor, apparently for my photographic benefit.  This is what the cajoling was about.  It happened so suddenly, that I barely had a chance to get my camera up into place.

So, she did it again, remaining in a perfect handstand on the barroom floor, long enough for me to grab one photo.  Unfortunately, with the portrait lens I’m using, I was too close to capture her full-length, but here is her torso in handstand position.  No joke.  No one is steadying her.

Everyone is cracking up throughout this demonstration.  So, obviously, I’m thinking, “This is my kind of bar.”

Then, without warning, the barmaid launched into a perfectly executed cartwheel on the concrete floor.  No warning, so I wasn’t able to capture that.  But, how cool is that?  Welcome to the Hill Country.

My burger was delicious, by the way.  After all…this is cattle country.  How could it not?

After the handstand and cartwheel, I asked the barmaid if I could take a couple of photos of her behind the bar.  She was happy to oblige.  She and I looked them over and decided these were the two best.

At some point, a gentleman suggested that I go to the bar next door…the Devil’s Backbone Tavern.  I think I said something like, “I thought this was the tavern.  You mean there’s another one?”  They said, this is Riley’s.  The historic Devil’s Backbone Tavern was just a couple hundred yards away.  So, guess what?

I don’t know why, but it was only as I was saying my goodbyes that I asked the barmaid her name.  She said her name is “Ethney”.  Very cool name.

Next stop…the historic Devil’s Backbone Tavern…just a couple hundred feet or yards further down the road. 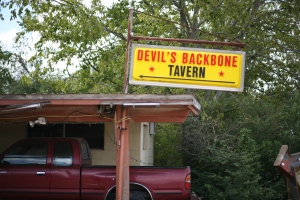 The interior of the Devil’s Backbone Tavern is old and dark.

Again, upon entering, I immediately introduced myself to the lone barmaid as “just a tourist”.  There were two gentlemen at one of the couple small tables, and another gentleman at the bar.

This place is old…nearly one-hundred years old, according to the barmaid, who immediately began giving me a tour.  I already had my camera with me, and again asked if it would be okay if I took some photos.  She said it would be perfectly fine.

First, she showed me the famous Hearth Keystone, located in the small hearth at the far end of the tavern.  Local lore says it looks like the devil.  They may be right.  In-person, it’s very dark, and hard to see the detail.  Here is an over-exposed image I was able to get.

Did I mention that this Tavern is supposed to be haunted?  Now, I don’t believe in such things…but, if anyplace was haunted, this would be it.  You can just feel the history of this place.

Next, the barmaid took me through an old wooden door into the rarely-used tavern dance hall.  Now, this dusty old room certainly looked haunted.  It was very cool.

Oh, and this time, I asked the barmaid her name, early-on.  Her name is Megan.  Megan let me take a couple of pics of her behind the bar.  Here’s the best one.

The tavern room is long and narrow.  Along one long wall is the bar, itself (above photo).  And taking up virtually the full length of the other long wall is this very cool, vintage shuffle-board game…still actively in use.

So, I was already off to a pretty good start in the Hill Country.

This is a text widget. The Text Widget allows you to add text or HTML to your sidebar. You can use a text widget to display text, links, images, HTML, or a combination of these. Edit them in the Widget section of the Customizer.
%d bloggers like this: